Trying to handicap a presidential election is far from an exact science.  So, let’s have some fun. 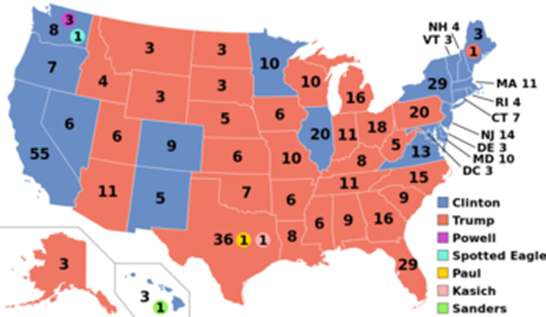 A few things come to mind.  That 77 electoral college vote lead in 2016 translates into a lot of flexibility in 2020.  The three big surprises in 2016 were Pennsylvania, Michigan and Wisconsin.  Well a 77 electoral college vote lead means you can lose additional states with up to an additional 38 electoral votes and still win the election.  For instance, Pennsylvania and Michigan have big cities like Detroit and Philadelphia where voter fraud is almost the rule.  Together those two states have 36 electoral votes.  If President Trump won all the states he won before except for Pennsylvania and Michigan, he’d still win.  That’s pretty good.  It would be very close but he’d still win.  But you might say what about Wisconsin and its 10 votes?  Well, the folks in Minnesota and Wisconsin are still relatively honest and in fact the blue-collar workers up there have actually increased their support for President Trump over the last several years.  I’ll say that it is possible that Wisconsin could go too but let’s look at those two states together.

Now look at some of the “close” states he lost.

Notice in each case that a third-party candidate (either Libertarian or Never-Trump or both) represented more than enough votes to turn the race around if shifted to the Republicans.

The first item up is Minnesota.  Trump lost by less than 45,000 votes.  McMullin who was a Never-Trumper protest candidate took over 53,000 votes.  That tells you there were over 53,000 extra republican voters available in 2016.  Well in 2020 McMullin won’t be running or if he is only Bill Kristol will be voting for him.  But most of those 53,000 Republicans will be voting.  Not to mention all the other blue-collar Democrats who now know that President Trump is pro-worker.  My strong opinion is that President Trump will pick up Minnesota’s 10 electoral votes in 2020.  So, going back to an earlier scenario, let’s say that Wisconsin flips, well it’s just as likely that we’ll snag Minnesota this time instead.  That’s pretty good.

The other states are a lot harder to handicap until we know who the Democrat candidate will be.  If Bernie or Liarwatha is the Democrat candidate then either one of their socialist platforms will be a big problem for the libertarians.  And if that’s the case then Gary Johnson’s pot head voters might vote their pocketbooks and in Minnesota, New Mexico, Nevada, Maine and Colorado that should be more than enough to tilt all those states to President Trump.

In theory that would change the Electoral College scores (all other things being equal) to 337 to 194.  Of course, this assumes that the Democrats would allow their daft electorate to choose their own candidate.  In actuality the politburo wants Creepy Uncle Joe or Bloomberg or Deval Patrick to be the candidate.  And that’s the big question mark.  Can they make the switch at the convention?  The way things are going Biden may not make it to the convention.  He may be an indicted co-conspirator along with his nincompoop son Hunter for the Ukraine mess.  So that would require either Bloomberg or Obama’s mini-me shadow Patrick to play candidate.  Neither is really the perfect candidate.  Bloomberg is an insufferable rich guy trying to get the votes of the urban poor that he subjected to the stop and frisk program in New York City which in Progressive circles is considered an abomination.  Patrick is a short squeaky voiced doofus that will be less than inspiring to the same urban crowd.  I’m guessing neither of them will bring out the Obama sized voting crowd.

But let’s say it is Bloomberg or Patrick.  That will cut into the Gary Johnson vote for sure.  But does it really change the overall situation on the ground?  In either of those scenarios I see Minnesota and the states he won in 2016 still going to President Trump and the rest of those states above toss-ups that, let’s say, go to the Dems.  Final Electoral College total 314 to 217.  That’s almost a hundred-point difference.  That means President trump has a pad of 46 points that can go against him and still win.  That’s more electoral votes than in Pennsylvania, Wisconsin and Michigan combined.  That’s as much as Texas and Wisconsin combined.

So those are the rosiest projections.  Between now and Election Day a lot of bad things can happen.  But you would have to borrow a lot of trouble to assume at this point that the odds are against us.  The economy, the stupidity of the Democrats, the obvious falseness of all the Deep State machinations against the President’s administration all add up to an advantage at the polls.  The items like voter fraud and changing demographics all existed almost identically in 2016.  Plus, the president has energized his base and they are behind him 100%.  Even the independents are starting to break his way.  A lot can go wrong but right now is not the time for fretting.  The wind is at our backs and the prospects for even better things seem to be there.