Yesterday was an interesting day.  Earlier I was commenting somewhat ironically on the essential, critical, crucial nature of the work I was able to accomplish on my dining room table.  The industry I work in is considered important because the products are critical to some individuals.  But I think it’s important to consider the circumstances under which certain work is done before throwing around words like critical.  Let me elaborate.

Yesterday was a bizarre weather day in my neck of the woods.  We had rain that varied from sprinkles to torrents without any rhyme or reason as to when.  There was also a wind advisory that quoted a range of wind speeds from 20 mph to 65 mph.  When I see a range that broad, I usually take it with a grain of salt.  To me that sounds a little like someone not knowing very much but employing a CYA strategy in case things do get out of hand.

Around noon yesterday I hear a loud cracking noise and then thesound of a high voltage line grounding itself through normal unprotected materials like trees, guardrails and the road.  We got one last loud bang and then the lights went out.  Luckily, we have a large emergency generator on an automated transfer switch that cuts in after a few seconds so life went on.  But looking out the window I could see a very large old tree hanging across the road and suspended in the trees on my side of the road.  This looked like a big problem.

I called 911 and the fellow there took the information and said someone was on the way.  And he was right.  Emergency vehicles of all description showed up.  There was a fire engine, a state trooper, some non-descript pick up truck with flashers, two power company cherry pickers and a big highway vehicle with a heavy-duty bucket on a big arm.

They were out there for a couple of hours without any indication that much was going on.  The fire engine and the statie left.  Eventually the highway guys started walking around and assembling some gear.  Now meanwhile the storm hadn’t abated much at all.  The wind was truly impressive as it shot horizontal rain in all directions with remarkable force.  Areas of my home that almost never even get wet were flowing rivers from time to time.  I even had to sojourn out into this mess when the sump in the lower driveway starting backing up.  Leaves in the sump that hadn’t caused any problem when normal rainfall was involved blocked the outlet line enough that about six inches of water was standing on the lower driveway and advancing to the house.  I freed the clog and that pool emptied into that six-inch pipe in an impressive way.  Luckily this was April and not February so the worst I got was wet.  But when I got inside, I was convinced that the highway guys would wait until morning to work on that tree.  After all nobody would freeze to death without power in 60 degree weather and working with chain saws on hanging trees in that wind and rain seemed foolish to me.

But about an hour later I saw the highway truck change position and the two power company bucket trucks moved over to the next two telephone poles beyond where the tree was located.  And then I could hear the chainsaws and see the trees pitching around as they took it apart.  Well those guys must know their stuff.  It took about an hour to down the tree and clear the road.  After that it took a couple of more hours for the linemen to rework the wires and restore power.  By then the wind was starting to die down.

Today I went out and checked out the aftermath. 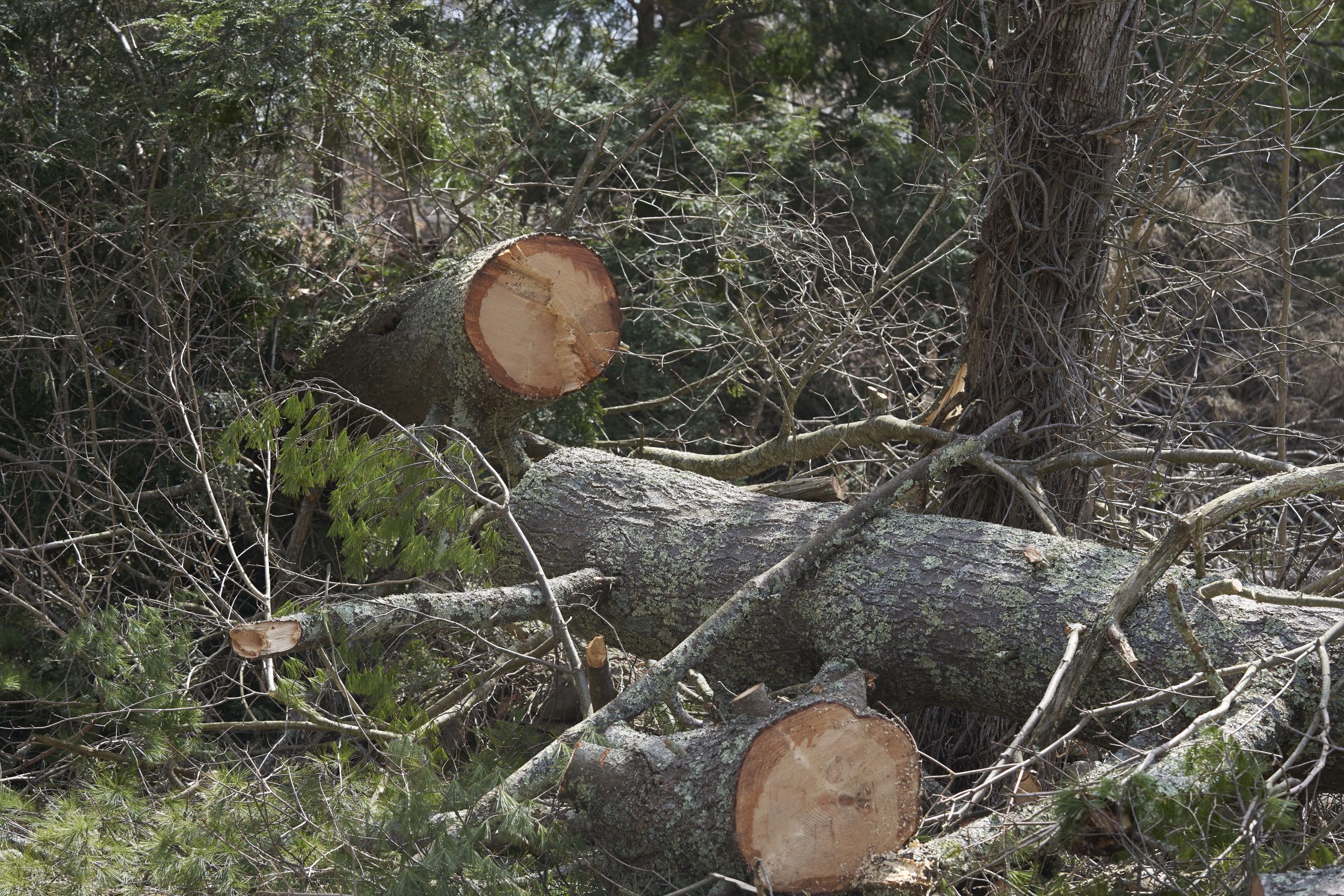 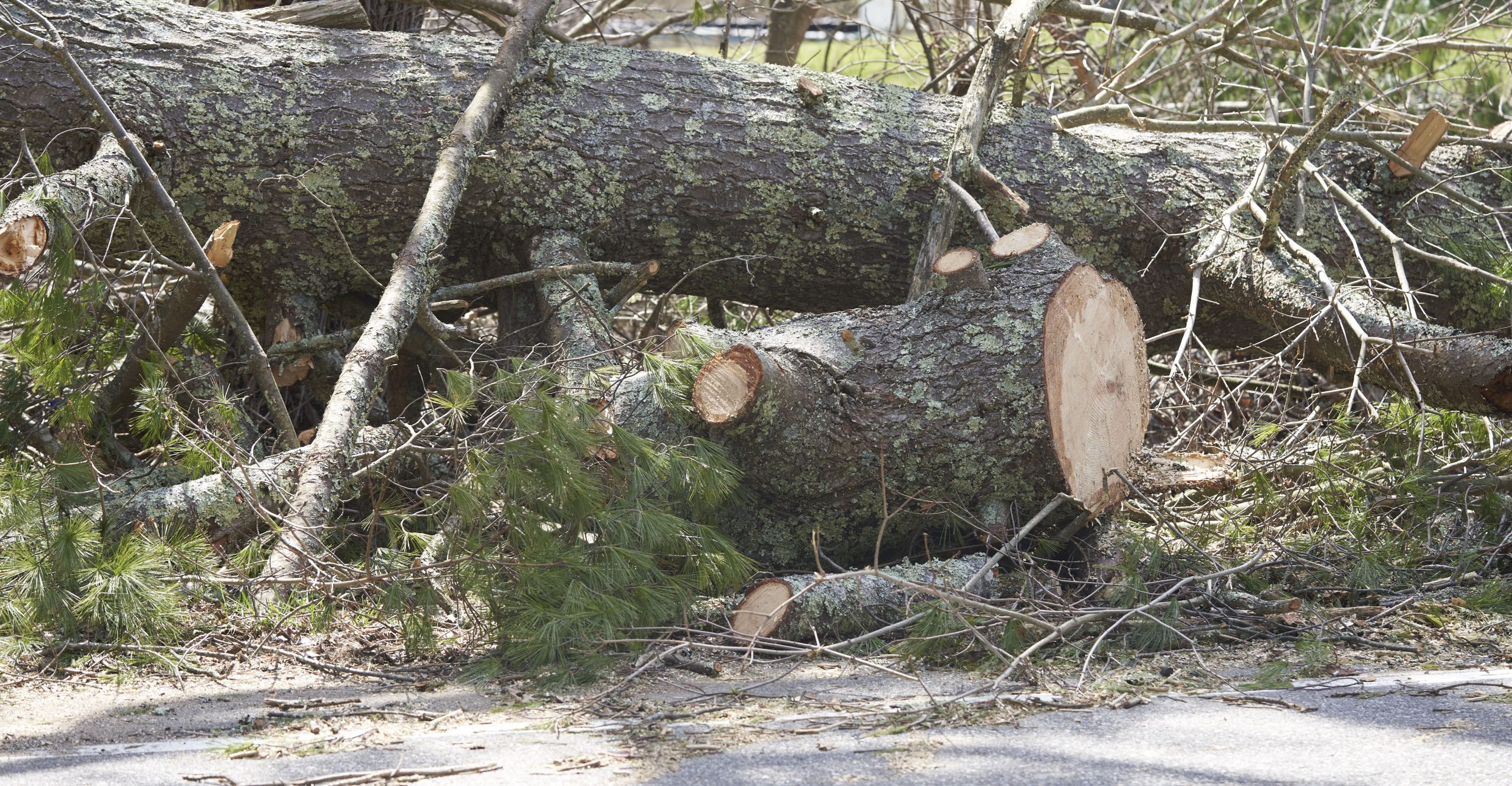 Interestingly the wind didn’t crack that tree it pulled it out by the roots.  I’m not sure if that made clearing the road easier or harder.  But looking at the size and estimating the weight of the tree sections that the crew was working with in that lousy weather I have to admit I’m impressed.

So, to put an end to this post, I guess I’m just saying that there’s work and then there’s real work.  If we’re going to have a world where power flows through wires across the countryside, we’ll need some men who don’t shelter in place when things go wrong.  They go out in the wind and rain and snow and do hard work so everyone else can stay warm and safe inside.  Hopefully one day soon a lot more people will remember that and once again make it part of the way we address the world we live in.  Not everyone can do essential work from the dining room table or the local Starbuck’s.