Today was a sort of macabre milestone.  For the first time in weeks New York did not have one of the highest totals in COVID-19 deaths in the country. 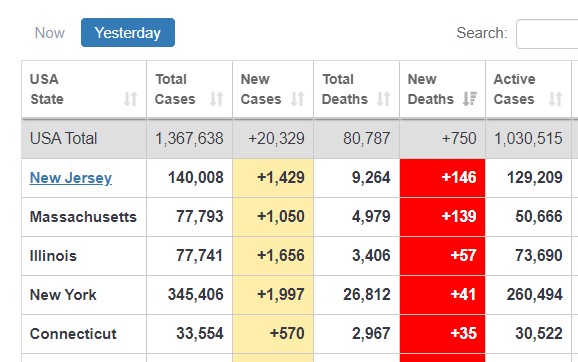 Rather than high hundreds or even more than a thousand deaths only 41 New Yorkers perished from the COVID-19 virus.

And this had a profound effect on the total deaths for the country.

The 750 nationwide deaths was the least since March 29th.  And just like that we can see that New York was sort of the COVID-19 epidemic all by itself.  And if you realize that the numbers for New Jersey and Connecticut are essentially just the suburbs for New York City it becomes even more apparent that the rest of the country just isn’t in the same category of emergency as New York City is.

So what has happened to slow the onslaught of the disease?  Well, apparently New York has finally killed off all their vulnerable elderly.  And the horrible part about that is the fact that it was mandated by the state.  As spelled out on the attached document whenever a nursing home patient was sent to a hospital with COVID-19 disease the nursing home was required to re-admit that patient as soon as the hospital had stabilized the patient.  Which of course means that nursing homes would have to accept infected patients back into their population along with their uninfected patients.  Knowing that patients over eighty are the most vulnerable to this disease the state basically played Russian roulette with all the nursing home patients.  And over time an enormous number of them died because of it.

When this fact was brought to the attention of Governor Cuomo he was unaware of it but his Health Commissioner confirmed it to him at a news conference.  Too bad he didn’t pay more attention to his actual epidemic strategy and less time worrying about his brother Fredo play acting victim on a part time basis in his basement.  If instead of locking down the working age population and destroying the economy he had quarantined the healthy nursing home patients and treated the sick ones in hospitals he might have spared tens of thousands of lives and still had an economy to work with.  Mario Cuomo didn’t seem to hit the IQ lottery with his two boys.

Watching the video of Chris Cuomo, I was sort of sad to see him demeaned.  I mean anyone who grows up in a large family knows that sibling rivalry and competition in an intellectual environment is stressful.  So, the fact that Chris is sort of the lesser intellect in the Cuomo family is something that many would feel sympathy for.  Of course, the fact that he spouts poisonous lies on CNN about non-Leftists makes him a whole lot less sympathetic.  Sean Hannity was supportive of Cuomo because the incident occurred while Cuomo was out with his wife and young daughter.  This is also something that should be acknowledged.  Being a celebrity doesn’t cancel out your humanity and shouldn’t excuse even your enemies from showing decency around your loved ones.  Once again, Cuomo has never given President Trump or his family any slack when tossing insults and vilifying them about any personal issues that have nothing to do with government.  But let’s just say it’s understandable that Cuomo reacted angrily and forcefully to his heckler.

But then as ever, Cuomo pulled the race card, or slightly less effectively, the ethnicity card.  Chris threatened to throw the heckler down the stairs for what he declared was the equivalent of the “n” word for Italian Americans, “Fredo.”  Huh.

All my ancestors, going back as far as I can determine, were Italians or descendants of Italians living in the United States.  And a good proportion of these were descended from Sicilians.  And on top of that my family is from an Italian neighborhood in Brooklyn that unfortunately was steeped in awareness of the Godfather movies.  I can remember back in the 1970s car horns in my neighborhood playing a portion of the Godfather theme.  It was quite sad.  Anyway, I consider myself relatively authoritative on this subject.  “Fredo” is not an Italian American slur.  It’s a mockery of someone who isn’t the brightest bulb in a family with more accomplished individuals.  In the Godfather movies Fredo is the incompetent older brother of Michael who bumbles and fails and finally betrays the Corleones while trying to show that he isn’t a loser.

In the famous scene where Michael confronts Fredo with his betrayal you hear Fredo defend his own actions by blaming everyone else for demeaning him.  He’s the older brother who whose pride has been wounded.

“I can handle things! I’m smart! Not like everybody says… like dumb… I’m smart and I want respect!”

Okay, so Chris Cuomo isn’t exactly Fredo.  He’s got a good paying job at CNN and all the material success associated with being part of a family that has had two governors of New York State in just two generations of the family.  Not bad.  So why does being called Fredo sting so badly?  Well, to be totally honest if you’ve ever watched any of his work on CNN, he does appear sometimes to be an idiot.  And again, in a highly competitive family maybe some unkind comparisons were made by his siblings or parents.  Who knows?  But the most important consideration is noting that no matter what, when a Leftist is attacked his first instinct is to call his attacker a racist.  Poor Fredo.  Well at least Andrew hasn’t sent him out on the lake to sleep with the fish.