A Little More Information Comes In

Some information I’ve gotten in the last day or so: 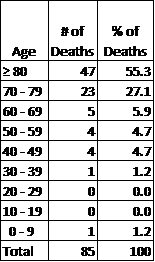 So over 88% of people who die are over 60.  82% are over 70.  That tells me that dosing all the old age homes with an anti-viral (which HCQ is) would go along way to knocking these death rates down by almost a  factor of 10.

There are plenty of smart people who want his thing to end sooner and without hundreds of thousands of deaths.  I’m hoping they start looking at the numbers and figure out that targeting the elderly is the key to dropping the mortality from this thing way down.

I’m sure people are thinking it and saying it. Getting the _right_ people (taking underline queues from Tyler) to take action is the hard part.

Even adding those with health risks for COVID-19 along with the elderly makes this a much more manageable problem. We’ll have to see if common sense will prevail.

The problem is that since big pharma cannot make scads of money off HCQ, they are going to fight it through their bought-and-paid lawmakers and other strategically placed stooges. Pharma plays both sides of the aisle without prejudice. They’ll bribe, excuse, me, “support thew reelection” of anybody, left, right or center, if they can get a vote to allow them to somehow patent HCQ so they can jack up prices as they have done to insulin and Narcan.

They’ll charge us an arm and a leg to “retool” to produce a normally low volume medicine. At this point I just want us to get the drug now. This has the potential of being a game changer and we know we need one now.