Another iconic episode.  Alright let’s get it out of the way right at the beginning.  Ratings must have been fading so they hired a Las Vegas burlesque queen in a very revealing costume to give the show a boost.  And as I remember my adolescent self was not opposed to this aspect of the show at all.  Honestly, she was probably the best-looking babe they ever had on the show.  In terms of acting, well it was Star Trek so really, who cares?

Kirk, Chekov and Uhura (boy that’s an odd combination) are in the transporter getting ready to beam down to planet XYZ123 when suddenly they vanish without the transporter even being energized.  Scotty, Spock and McCoy jabber at each other trying to figure out what happened.

Meanwhile we see Kirk, Chekov and Uhura on a distant planet called Triskelion being assaulted by mismatched gladiators with silly weapons.  The hot looking warrior woman named Shahna is dressed in an aluminum foil bikini and armed with a giant-sized bottle opener.  A caveman in a Fred Flintstone suit is armed with a whip and a net.  A relatively ordinary looking guy in hose and doublet named Lars has a letter opener as his weapon and then there’s this really small old woman who doesn’t do very much and maybe also had a giant bottle opener but since I was watching Shahna most of the time I’m not really sure what the other woman had.

Once the Enterprise crew is subdued by the “thralls,” a weird skinny, bald headed guy in a black robe tells them what’s what.  He is the Master Thrall named Galt.  He runs the gladiatorial games for the “Providers.”  The Providers are disembodied brains living in a cavern a thousand meters below the surface of Triskelion and they spend their pathetic lives capturing beings throughout the galaxy with their powerful transporter beam and betting a currency called quatloos on the fights they organize between the captives.  But since they are disembodied brains that live in a cave what they would do with the quatloos they win is completely meaningless.

Meanwhile back on the Enterprise Spock confirms that the landing party is not on the planet below and finding an energy signature in a cloud decides to head twelve light years in that direction to find the captain and company.  McCoy and Scotty whine and complain about this decision and finally Spock has the best non-Shahna moment in the show when he tells them that since he is in command that he will do as he pleases unless (and hear he lowers his voice so that only the two of them can hear him) McCoy and Scotty intend to start a mutiny.  The two complainers immediately started hemming hawing and denying they had any such idea and fall in line with the plan.

Kirk and company learn the hard way that Galt and the Providers use collars on the necks of the thralls to train and punish disobedience.  They seem to learn that there is no escape and no way to resist.  So, Kirk quickly gets down to business and seduces Shahna with his Shatnerly charms.  He hugs and kisses her and tells her about the stars and Earth and how much he likes her.  But in the next scene he kisses her and then socks her in the jaw to get her key to his cell and make a break with Chekov and Uhura.  And since Providers are omniscient, they are quickly subdued and sentenced to die.

Kirk is now doomed to die but first he asks to meet the Providers face to face.  He is transported into the crappy cave that the Providers live in and berates them for their pathetic existence.  At this point the Enterprise reaches Triskelion and is immediately immobilized by the Providers.  Kirk appeals to the Providers’ gaming blood and proposes a wager.  If he defeats a thrall in single combat, he and his people will go free and the Providers will give freedom and training to the thralls to become independent beings on Triskelion.  If he loses then the whole crew of the Enterprise will become thralls.  The Providers decide instead that he’ll have to fight three thralls.  Take that Kirk!  Kirk dispatches the caveman and Lars but the third guy is only injured so he is replaced by Shahna who is still mad about the sucker punch Kirk gave her earlier.  Finally, Kirk takes away her bottle opener and with Lars’ letter opener at her throat she surrenders.  The Providers turn out to be good sports and keep their word and let the Enterprise go free and agree to turn the thralls into people.

There is a maudlin scene between Kirk and Shahna and after the landing party beams up Shahna gets a short monologue where she talks to the sky and thanks Jim Kirk for showing her the road to female empowerment and possibly less-revealing clothes.

So much to say.  Besides Spock’s mutiny game I think the other stand out comedy was Chekov being cornered in his cage by his selected mate, the old short weird looking woman thrall.  She’s smitten with him and he tries to be civil but he’s obviously weirded out by her appearance and overeager attentions.  It’s very creepy.

This show is just overflowing with Shatner doing his thing.  His shirt has been taken away and has been replaced with a harness that reveals his noticeable weight gain.  He’s leaping around kicking and punching everything in sight.  And of course, his amorous moments with Shahna highlight some of the very corniest acting Bill Shatner ever committed.  But I think what I like best is when Kirk is dismissing the idea of the Providers betting “trifles like quatloos” when human lives were so much more meaningful.  There we see Kirk the negotiator, Kirk the gambler.

So, all in all the girl is very attractive, although her eye makeup looked to be about an inch thick.  The plot was amusing and reasonably clever.  The Shatner mockery value was almost off the scale.  I’ll give this an 8 // 10. 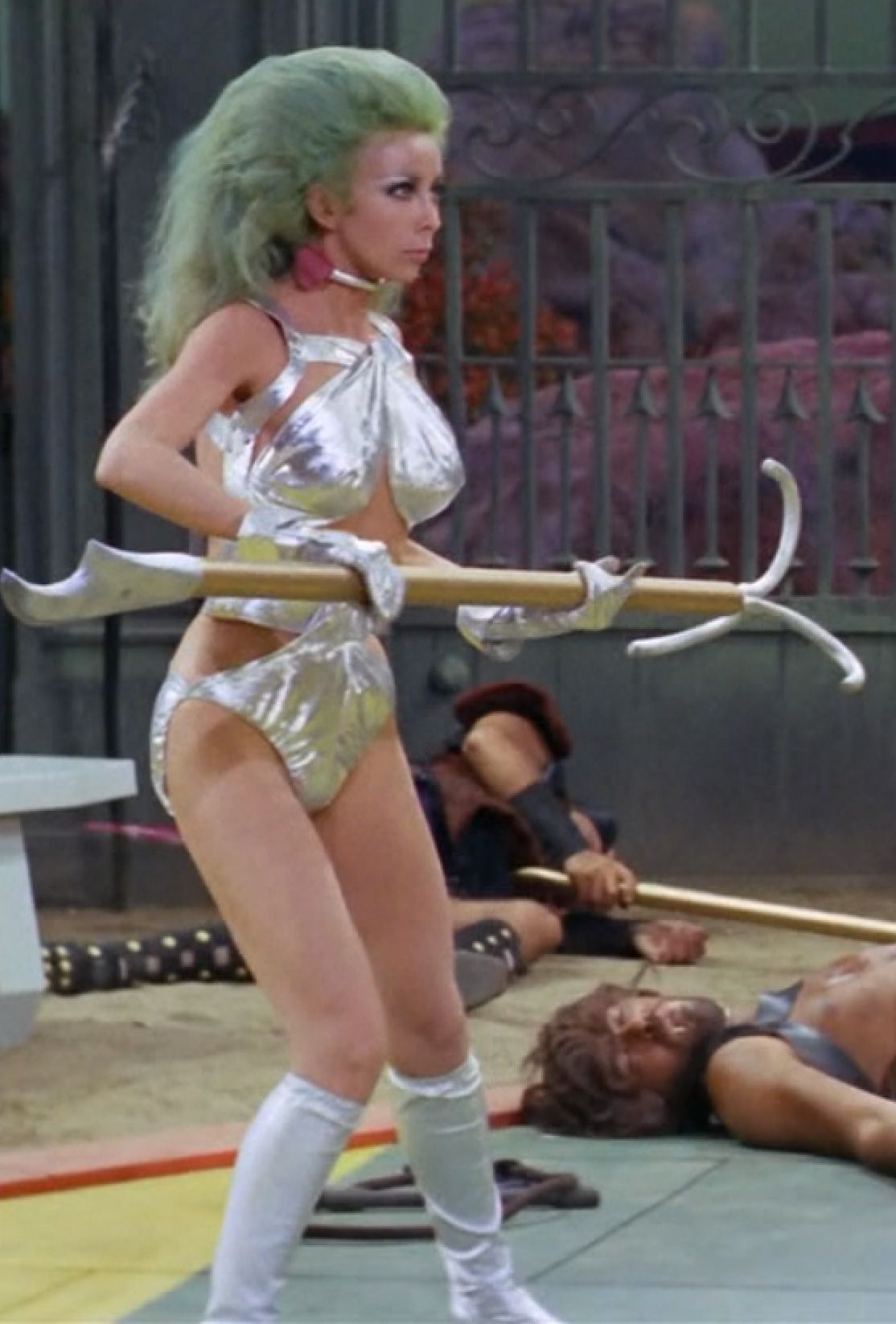