Regular readers of OCF will have been dismayed at the low output for the last couple of days.  Shameful as it is to admit, the day job is interfering with my work here on the site.  As tragic as it is it will be short lived.  After Wednesday I will have a very long break that will allow me to bloviate to my heart’s content.

In the meantime, I’ll produce as much content in the next couple of days as is humanly possible while simultaneously being beaten like a red-headed stepchild or whipped like an army mule.  Working where I do is akin to being an orc.  But not one of the really cool orcs like the Uruk Hai, more like the morgul rat types that grumble and complain and are constantly whipped by the non-commissioned officer orcs that always overhear them grumbling.

The President has once again befuddled his critics and seems to have dodged the COVID bullet and now claims he’s feeling better than he has in twenty years.  What the hell!  Where’s my dose of dexamethasone?  I could really use a dose of “twenty-years-younger” right about now.  Oh well, he is the leader of the free world, if there is a free world anymore.

As an aside ShatnerKhan III will occur this Saturday and as a major change of pace, there will not be any pastrami or corned beef.  There was a decision to go with homemade sausage.  There will apparently be both regular Italian sweet sausage and a specialty thin Italian sausage called cervellata that was much in demand in Brooklyn back when there were Italian neighborhoods in Brooklyn.  Of course it isn’t pronounced anything like it’s spelled thanks to the magic of southern dialectical Italian.  It sounds more like shivrelod.  But if you told that to one of the guys from the old country they’d claim you weren’t hearing it correctly.  Yeah right!

It has been speculated that ShatnerKhan has degenerated into an excuse for eating fattening foods.  I would argue that is actually an upgrade.  Be that as it may, we will be breaking new ground exploring a little known gem from Shatner’s middle period called The Devil’s Rain (1975).  Just listen to this summary and look at the cast.

A satanist cult leader is burnt alive by the local church. He vows to come back to hunt down and enslave every descendant of his congregation, by the power of the book of blood contracts, in which they sold their souls to the devil.

You might think this could be a good horror movie.  You might be wrong.  To round out the program we’ll be watching a favorite Star Trek episode to be decided by popular acclaim, listening to some of Shatner’s latest spoken word songs and watching a particularly disturbing interview that includes Shatner and Mike Tyson threatening each other with death.

In addition to sausage and peppers sandwiches there will be  pumpkin, coconut custard and apple pies a la mode, various sweets and coffee.  Camera girl offered a fruit salad as a healthy choice but we’re going with mounds bars and M&Ms.  Considering the age and weight profile of the audience there may be casualties.

There was a discussion about live streaming our comments on The Devil’s Rain but in order to maintain anonymity I purchased multiple copies of the mask that Michael Myers wore in Halloween.  This mask is supposedly based on a mold of William Shatner’s face. 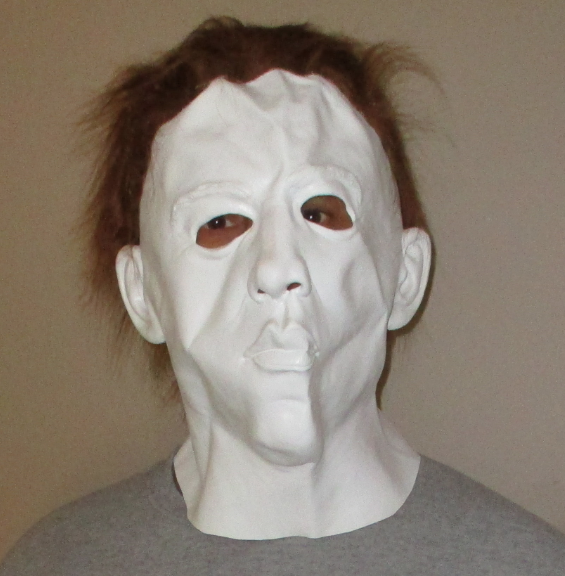 After wearing one for thirty seconds I don’t think this will work out.  I also have my doubts about our technical ability to perform a live stream.  But some enthusiasm still exists.

Strange and stranger things are happening wherever you look but I contend we need to have some fun in the midst of this so bear with me.  I’ll be back to share some serious thoughts soon but right now chaos reigns here at the compound.

Never be ashamed of the day job. Something has to pay for the internet service, camera lenses, etc. In order to make a life you must first make a living.

The mask looks more like it was molded from Paul Stanley of KISS.

The day job has become a drag. Twenty years at the same place can be a bit much. Plus the people haven’t changed for the better. The old guys are all going away and they were more fun than the current crop. Plus they’re tired of me so let’s just say the feeling is mutual.
Yeah, the whole Shatner thing may be an urban legend but I only need the thinnest reed to build my house of cards upon (to mix a metaophor or two). Plus it’s too claustrophobic to wear for very long.

I want to attend…I’ll bring sopressata, pronounced in my neighborhood, “suprasad”

You wouldn’t want to get mixed up with this crew. They’re certifiable.

Skip the movies and just eat and listen to the music – https://youtu.be/rmPOWJtsEGc

The horror, the horror. Well, he is a man of many dubious talents.