Something to Raise My Spirits

I was writing a post about what might be going on this year.  It was coming out pretty depressing and so I put it aside.  As I mentioned yesterday the Mid-Winter Blues have reached me.  Adding depressing predictions is just something I can’t justify at the moment.  I need something light to move me through my day.

So, I checked my almanac and sure enough we’re over the hump of winter. There are approximately thirteen weeks in winter and we’re in week eight. and the days are about 90 minutes longer than they were at Winter Solstice.  So, by any measure of sidereal momentum, we’re on the upswing.  In honor of this milestone, I will put all doom and gloom aside.  After all, the human soul needs hope and light to carry on.  That’s what I’ll do.

Here’s a video that lists the ten most conservative cities in the US.  The narrator is a little bit snarky, probably a liberal jerk but I still found it interesting.  I’m sure there are alternate lists but it’s a good starting point.  If you want to add a city to the list leave it in the comments.

And because I’m always looking for good science fiction movies here’s a video that claims to do that.  CineFix Top 10 Science Fiction Films of All Time  I agree with some of these picks disagree with a couple and have never seen a few others so I’ll check them out and maybe find something good.  If you disagree with any feel free to say.

And this just in, the idiots in the Senate have finally finished the farcical impeachment theater with seven cretinous Republicans voting with the Democrat creeps.  These were Sens. Richard Burr of North Carolina, Bill Cassidy of Louisiana, Susan Collins of Maine, Lisa Murkowski of Alaska, Mitt Romney of Utah, Ben Sasse of Nebraska and Pat Toomey of Pennsylvania.  Burr was a bit of a surprise.  I wonder if he’ll join Romney and Sasse in being primaried out by their states when they come up for re-election.  Let’s hope.

Well, look at that.  Now my spirits have lifted.  I’ll get on with reading the accounts of the farce and wait for President Trump to comment on it and then tell us what the future will hold.

Well see there now, seek and ye shall find.  Ask and ye shall receive.  A nice reward and we can hope that serious people will now step forward to start discussing what our side can do to sidestep what’s going on in Washington DC and begin to return our lives to something resembling the better world we lived in just one long year ago.  I only hope the smart and powerful decide to come to our aid.  They can make this easier and less ugly.  If the little people have to do it ourselves it’s going to be very painful and so ugly that I don’t even want to imagine it.  No one wants the United States to go through something like the fate of Yugoslavia.  But more and more it’s looking like that is how it will play out.  But that’s a discussion for another day.  Today I’ll just bask in a good ending for a mid-winter day.

Update:  Now it can begin. 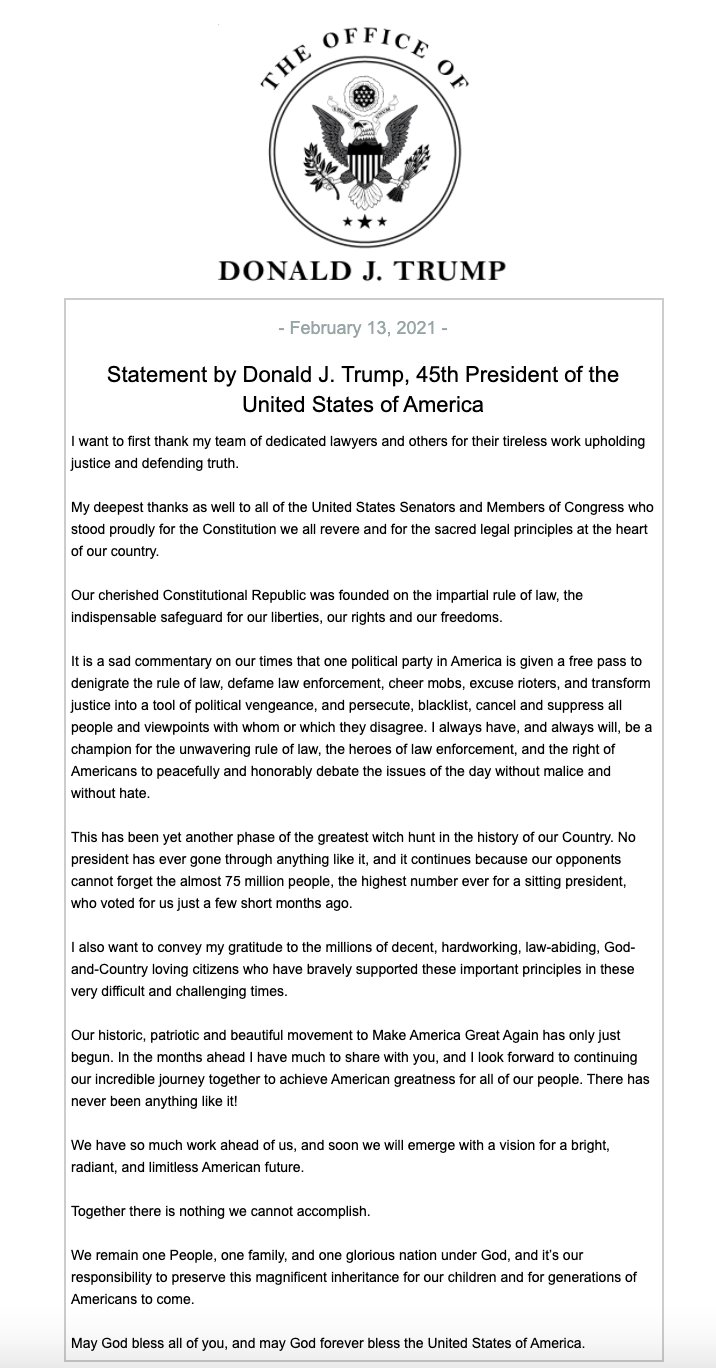