Looking back on my older photography posts I discover that in April I will have had my Sony A7 III camera for three years.  I think this is a good time to review what I think about the recent progress that Sony has made and where the A7 III and my photographic needs stand.

First off, the A7 III is a wonderful camera.  It produces images that I never could have imagined possible ten years ago when I started using the Sony mirrorless cameras.  When I moved from my Sony A-850 DSLR to the NEX mirrorless cameras it was incredibly disappointing.  The autofocus didn’t deserve the name.  It was manual focus or nothing.  The battery life was laughable and the viewfinder was pretty sad.  I could get some good results from it, even results indoors that I might not be able to get with my DSLR but frustration was a constant part of the Sony photographic experience.    If I knew then how long it would take Sony to reach the A7 III level of capability I probably would have bitten the bullet and moved on to Canon or Nikon.  But I didn’t and now finally I am truly pleased with the system.  Sure, there are still some quibbles, I wish the LAEA5 adapter would allow me to autofocus my mechanical autofocus A-mount lenses with the A7 III but that is just that, a quibble.  If I wanted, I could buy an A7R IV or an A9 and get that functionality but that would be kind of crazy from my point of view.  So here I am with a very good digital camera and a chance to compare it to the newer Sony models.  After all, the A7 III is a generation before the IV series and a notch down from the professional A9’s and two notches down from the flagship A1.  So here are my thoughts.

Back when the Sony A9 first came out I was curious to see what the advantages of such a camera would be.  I rented it and gave it a tryout.  What I found was that it was a sports camera and the A7 III was not.  I know that was what it was touted as but it wasn’t apparent until I had it in hand just how inadequate the A7 III was for things like tracking autofocus or just how inadequate the file buffer was.  The A9 was light years ahead of my camera.  And even the autofocus I typically used for macro shots of insects and birds was more precise and faster and had additional capability that my camera lacked.  For instance, the A7 III can stay in magnified view when focusing repeatedly on a subject that I’m getting ready to capture.  But once the shot is taken it returns to unmagnified view.  The A9 can stay in magnified view indefinitely for shot after shot.  That is a great advantage.

So, the A9 has capability that I do wish I had.  But image-wise I think the A7 III files are at least as good as the A9 files.  There has been an A9 II update a few years back.  I haven’t tried it out.  From what I’ve read the improvements are part of the autofocus upgrades and allow for even better sports and wildlife action shooting.  I’m sure it’s very capable but once again the sensor hasn’t progressed in terms of high ISO capability.  In fact, based on the DXOMARK testing the A7 III still has the highest ISO rating of any full frame camera on the market.

Recently Sony came out with a $6,500 flagship camera, the A-1.  From what I understand it is an even more miraculous sports camera than the A9 series.  It has a ridiculously large writing buffer and can take thirty shots per second or something obscene like that.  But its sensor is not rated to a higher ISO rating.  It does have a 50-megapixel sensor.  But that also means you get 50+ megabyte file sizes which is starting to get cumbersome.  Maybe someday I’ll try it out just for laughs but that price tag is outrageous.

So here I am.  Other than my camera not being able to autofocus my two favorite a-mount lenses, the Sony 135mm f1.8 lens and the Minolta 200mm f4 Macro, I really don’t need any of the new cameras.  Even the new Sony A7S III really doesn’t interest me.  I’m not a videographer and its high ISO numbers surprisingly still don’t match the A7 III.  This was a bit of a shocker for me.  The A7S series is supposed to have the best low light sensitivity of all the A7 line.  But apparently the video improvements are what drove the new model and high ISO was left as is.

If I were a sports and wildlife photographer then the A1 or at least the A9 II would be the cameras I wanted.  If I was a purely landscape guy then the A1 or the A7R IV would provide me with the resolution I crave.  If I was a videographer and I didn’t want a full-blown video camera I’d be looking at the A7S III.  But I’m just a general-purpose photographer that does some landscape and some macro and a little bit of wildlife and no video.  So, all of those other cameras are overkill and sometimes inferior for my needs.

For yourself this review might help point you in the direction of which Sony full frame ILC is right for you.

Back in February I rented this lens for a Connecticut Riverboat ride to photograph bald eagles.  Due to my rank stupidity the shutter speeds were too slow to compensate for the vibration and motion of the boat.  But after the trip I tested out the lens and found it was sharp enough to warrant purchasing one at some point.

Well that point is now.  It arrived yesterday and I took some shots of birds, hummingbirds, a blue jay and a swallow.  What it showed me is that a600mm focal length is very unforgiving of vibration of any sort.  This just a quick tease.  Here are my very unserious first shots and comparison photo to show you the size.  Actually for a 200-600mm zoom it’s pretty compact and not very heavy.  But I ‘ll get into all the specs in the next post here’s just something to get my foot in the door. 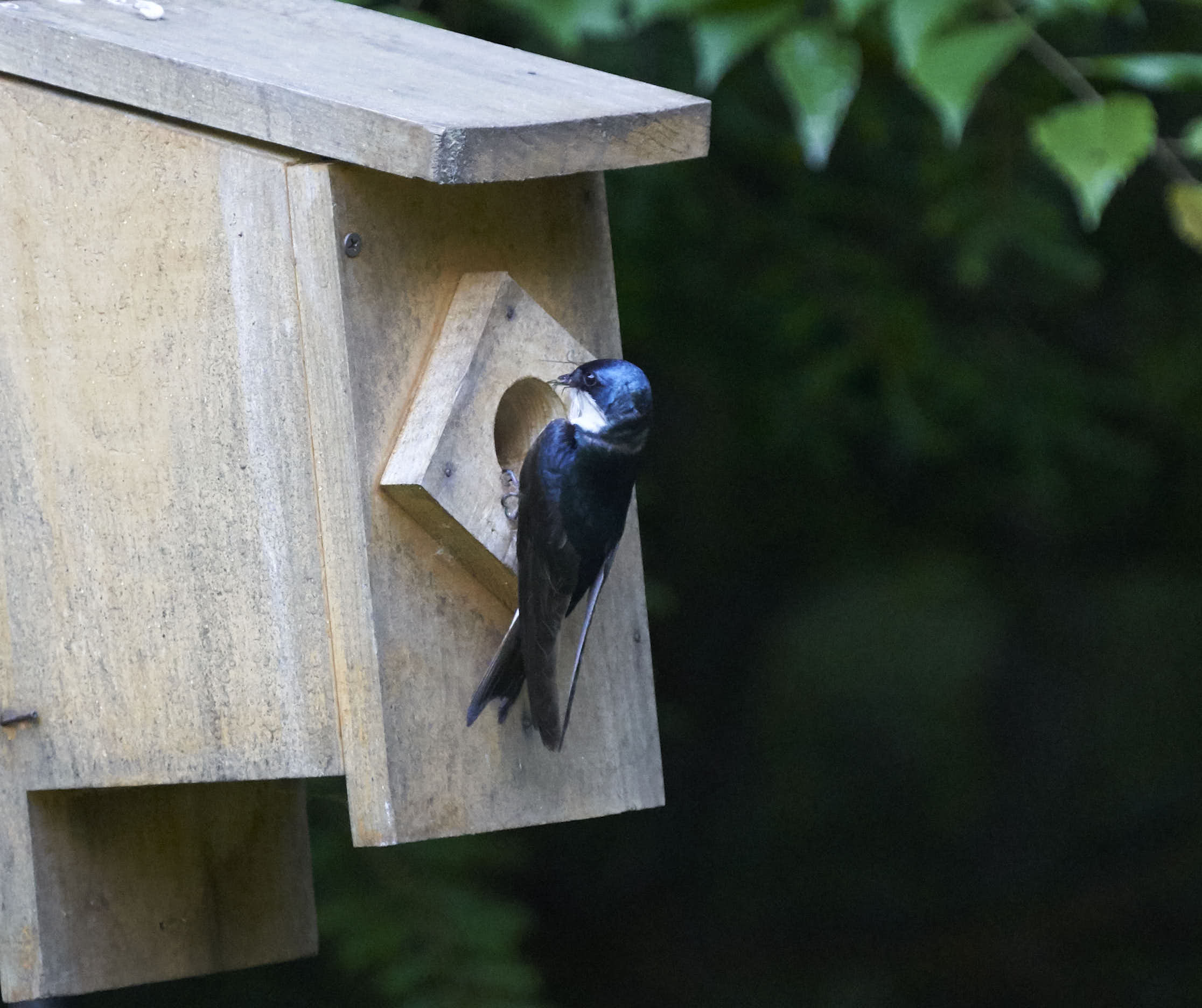 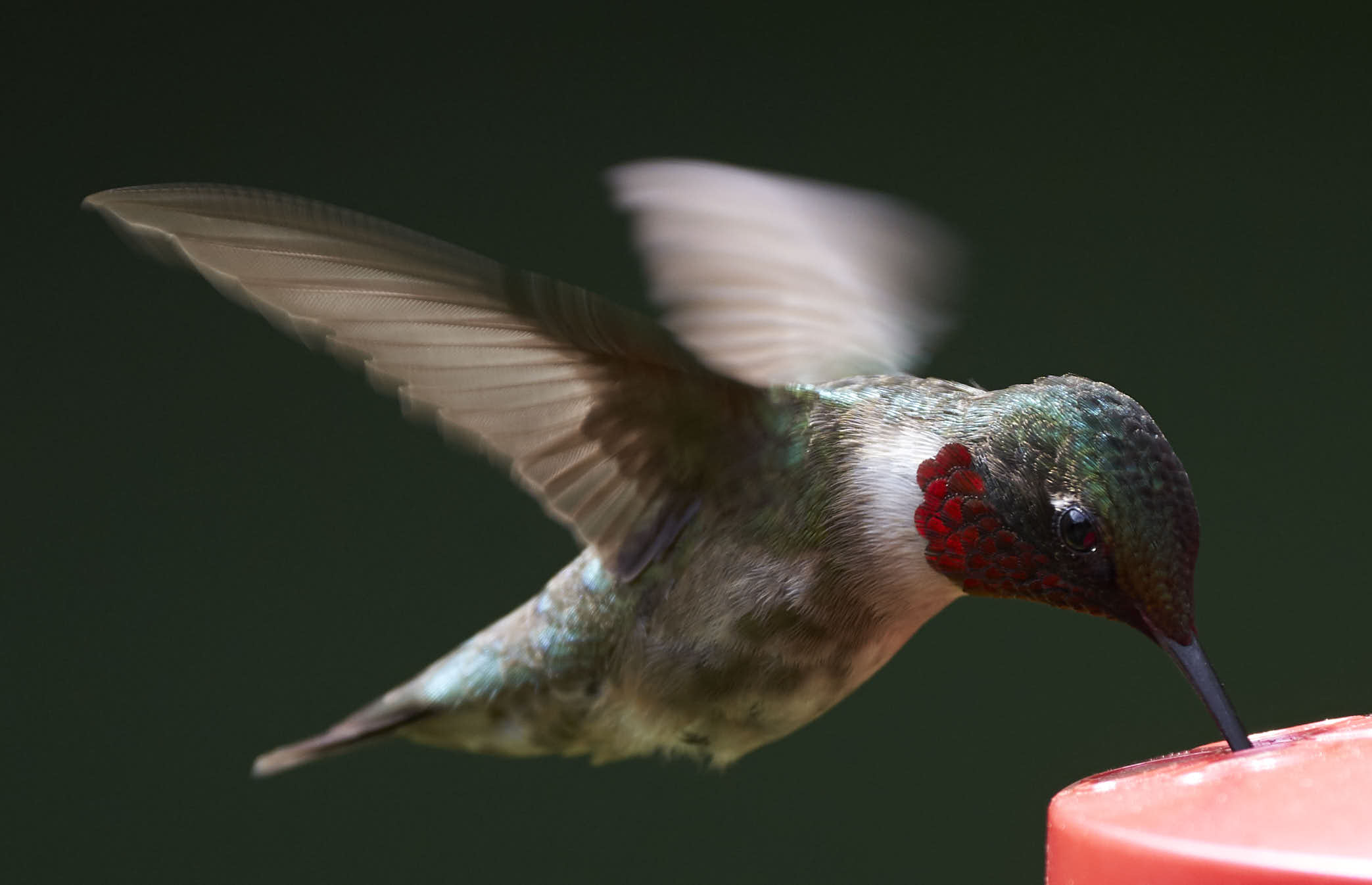