The Dem’s Much-Hyped Jan. 6 Hearings Are A Flop: I&I/TIPP Poll
Many question the Jan. 6 Committee’s integrity due to its highly partisan, anti-Trump composition.

Only 21% of the public are very confident that the committee is acting in good faith.  And 55% are unconvinced there’s any there there. 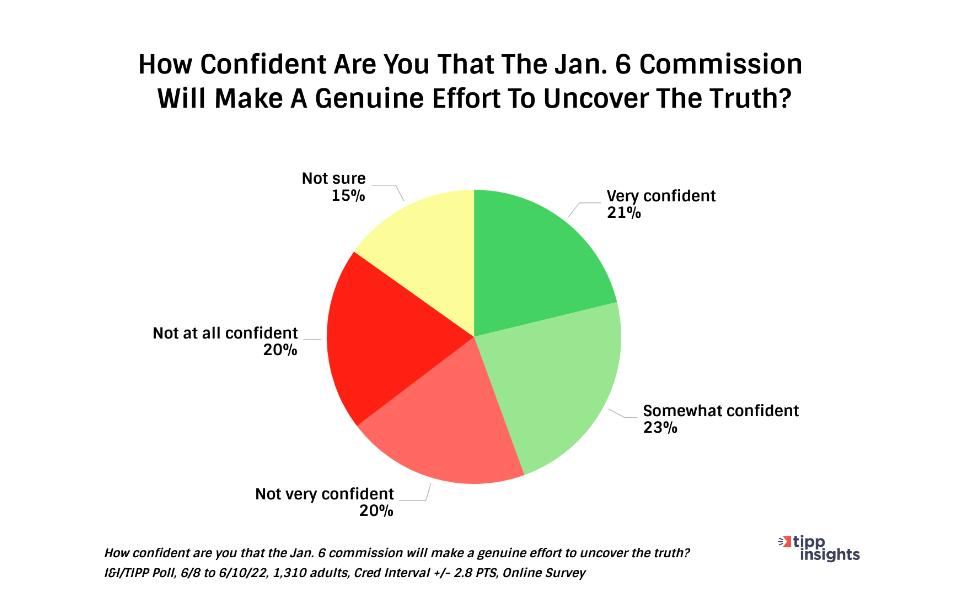 Guess I’ll get back to my reruns of Firefly.  If anyone needs me I’ll be in my bunk.

I turned on the tv last night to watch a show and immediately was confronted by Liz Cheney’s ugly mug.  I had run smack into the Jan 6th show trial.  I let out a yelp and switched inputs on my remote to reach the stream I was looking for on the screen.  Yikes that was close!  Honestly, I am trying to enjoy the summer and wasting even a single moment of it on the Jan 6th Committee is anathema.

Having avoided that death trap, I congratulated myself for my quick work and indulged in a frivolous hour of detective show fun about Harry Bosch.  Of course, even this supposedly neutral entertainment has been infected with social justice of various stripes.  Harry is fighting against injustice where marginalized people like blacks, Latinas and “the Homeless” are being put upon by the evil white man but at least there’s no sign of Liz Cheney or Adam Schiff.  So, I relaxed and spent an hour with Camera Girl with only a minimum of it involving me yelling at some propaganda subplot of the show.

Seriously, kudos to Fox News for refusing to join the other networks in giving wall to wall coverage to this Stalinist struggle session.  It’s the summer and the living is easy for a reason.  Good weather, long days and the sights and sounds of summer make this the time of year that people live for.  Only a dimwit would force himself to endure hours of Cheney and Schiff banging the insurrection drum.

I checked in with the Real Clear Politics Biden Approval Rating and it was at a new low.  So that improved my mood. 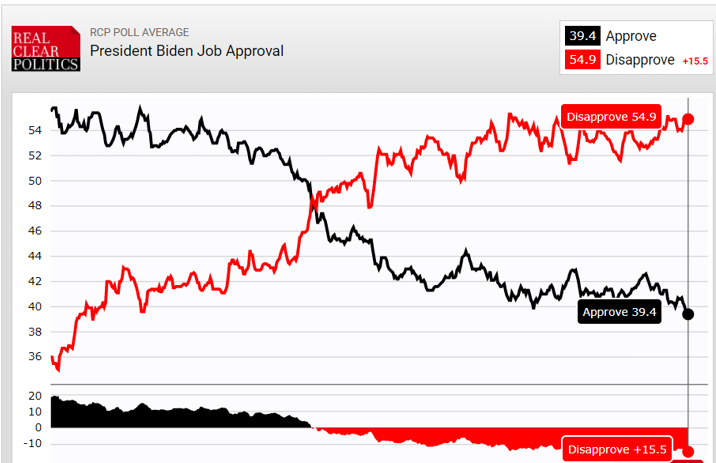 The average has now edged below 40%.  Which means that several of the polls have him in the mid-thirties.  That must be freaking out the likes of Nancy Pelosi pretty strong.  Schadenfreude is an addictive drug and I must admit I’m enjoying the experience of reading those headlines of Democrat political panic over the mid-terms.  Dems and RINOs losing their cozy jobs in the Congress does quite a bit to salve my feelings over $5/gal gas and $6/gal milk.

I was comforted by reading that at least there were Federal Marshals on duty at Brett Kavanaugh’s house when that psychopath showed up at 1 am to kill him.  Apparently even Merrick Garland isn’t blood thirsty enough to allow the assassination of a Supreme Court Justice to occur on his watch.  And I’m enheartened that some of the press has linked up Chuck Schumer’s “released the whirlwind” threat against Brett Kavanaugh to this latest assassination attempt.  It seems as if the Democrats and the Biden Administration just keep stepping on rakes as we continue on our way to societal ruin.

I saw an article that claimed that Biden would pivot after the mid-terms and move his policies to the middle to try and work with the new Republican controlled Congress.  The lefty author of the piece was decrying this move as unnecessary.  Apparently, some on the Left think things are bound to get better and they don’t want to lose out on the advantages that bankrupting the middle class will give their side.  I’m not sure I think Joe Biden knows enough about what he is doing to strategize any post mid-term pivot.  I think half of his administration will be bailing out after the mid-terms and we’re going to endure a really awful two years of economic chaos.

But today I’ll have some fun.  I’ll take some photos and get some air.  I hope you have a good day too.

Suicide of a January Sixth Defendant

Reading this article is sickening.  The Justice Department is made up of evil men.  At this point I believe we’d be better off with warlords running our country.  Then at least we wouldn’t have the hypocrisy of claiming equal protection under some kind of fair legal system.  We’d know right upfront that the powerful destroy the weak whenever it suits them.

This guy reviewing the movie sounds like a normie moderate but he makes the good point that the real crime on Jan 6th was the US government treating harmless protestors as enemy combatants.  I was listening to Nick Searcy on a podcast talking about why he made the documentary and after seeing a few clips and listening to him talk about it I figure I really should see it.

The PJ Media guy makes one good point when he says emptying out the FBI is job one if we ever get control of Washington again.

January Sixth, A Day that Will Live in Insignificance

I counted about twelve articles about “the insurrection” at Real Clear Politics.  As is their policy, half were by Leftist loons and half by our side (at least nominally).  As expected, the lefties are in full hyperventilation mode.

Those last two were by Bernie Bros who had been huffing lighter fluid earlier in the day and wandered over to where I was typing.

Be that as it may, I don’t think the American people for the most part care even a little bit that this is the anniversary of the day that bison man claimed control over the United States of America.  They seemed more interested in the fact that after two years of COVID torture we’re still looking at Biden’s stupid face covered by a ridiculous rag.  And they are especially interested in why food and gasoline prices have skyrocketed.  And some of them are interested in why the cities they live in are infested with bands of roving marauders who apparently have full immunity from arrest by the now toothless police force.

I think it’s interesting that the mainstream media has rendered itself completely untrustworthy.  At this point they could be giving away free cash and no one would bother to read what they have to say.  In addition, idiots like Adam Schiff and AOC have drifted so far from reality that only the MSNBC crowd bother listening to them rant.  And even these rabid partisans seemed strangely apathetic.

We may have reached a point where all anyone can think of is, “How many days left until Brandon leaves the White House?”  Sure, the Dems in the House will go through this charade.  They may even decide to impeach Donald Trump again.  After all it’s been almost a year since they impeached him last time and that is a long time.

But for me there’s nothing very important in the news at the moment.  Tomorrow I think the Supreme Court is supposed to take up the issue of whether the vaccine mandates on large businesses are constitutional.  Now that is important.  Could it be possible that the Supreme Court will break free of oligarchic control and do their job honestly?  It seems unlikely but it’s at least remotely possible.  I hardly want to dare hope for such a thing.  But I confess I’m excited about the prospect.  If the corporate mandate gets overturned then what about the other mandates?  Why should anyone be forced to be vaccinated against his will?  How can any of that be constitutional?    A return of sanity in this instance and at this particular moment might be a sort of tipping point in the long night of madness that is COVID.  It might just be enough to make Dementia Joe throw in the towel and go back to hiding in the White House basement.  That would be a wonderful late Christmas present for the whole country.

Tucker Carlson is doing an expose on the January 6th protest/setup and he is getting enormous pushback from everyone on the Left from the ADL to Liz Cheney to every crazed lunatic on CNN, MSNBC and Fox News itself.

I have to admire his courage and coincidentally I’m shocked that Fox News is allowing him to do it.  And to dust off an old chestnut, “If you’re taking flak you’re probably over the target.”  Kudos to TC for speaking truth to power.  I’m sure Google, YouTube, Facebook and Twitter will ban the video and any clips from it from their platforms.

But Fox News is a pretty big megaphone.  If he has anything new that will give it wide coverage.  And even if we’ve heard it before lots of normies haven’t seen it all laid out together.

I’m looking forward to watching it.  Carlson has been hammering Biden pretty hard lately and it’s gratifying to see.  Tipping points are really hard to identify.  Let’s just call this another nail in the coffin.