Results and Conclusions From the Poll in Fold, Flee or Fight

So here is what people said in the poll.

Somewhat comfortingly, more people thought the red states would take action than thought that nothing at all will be done.

It’s very difficult to make any hard and fast conclusions from this poll other than that there seems to be a sense that the red states are where we hope to see some pushback against the Dems.  What it says to me personally is I should be looking for a new place to live in red state America as soon as its possible.  And if I’m smart, I should start lining something up even before I think I’m ready to go.  Things might change quickly at some point and “want” could turn to “need” really fast.

My own votes were for Flee (2) and Fight (2).  I guess I’m more pessimistic than some folks out there.  And actually, seeing that there are plenty of people more hopeful than myself makes me feel more hopeful than I was before the poll.

Thanks to everyone who participated.  This poll has clarified some of my thinking.  I am now convinced that the nothing good will happen at the national level.  I see the federal government going after our freedoms and punishing us every way they can.  The best hope we have of improving our lives in this country is finding a state or states that are willing to defy Washington and make their own policy on everything from social welfare to the Bill of Rights.

There is something very liberating about making a decision.  Concluding that the Right will not be able to pry the United States loose from the Woke Cult is a depressing realization.  But eliminating the indecision from my thinking makes the whole situation a net positive.  It is much worse to waste time and resources on a lost cause.

So, farewell Land of the Free and Home of the Brave.  Hello Brave New World that has such people in it.  Many horrible things await me and much sorrow but at least I’m heading in the right direction.  And as the Chinese Philosopher Lao Tse said, “A journey of a thousand li starts with a single step.”  Knowing which way to go is the beginning of that journey.

From now on I will give less attention to what the likes of Joe Biden and Nancy Pelosi and John Roberts are doing and saying and more attention to what Ron DeSantis and Kristi Noem are doing and saying.  Of course, there’s bound to be overlap but I won’t agonize about threats to the filibuster or Supreme Court packing or unconstitutional laws.  I assume that all that stuff will happen.  I’ll be more interested in how the free states react to those kinds of things.  Will someone stand up to this abuse.  That’s what I’m interested in. 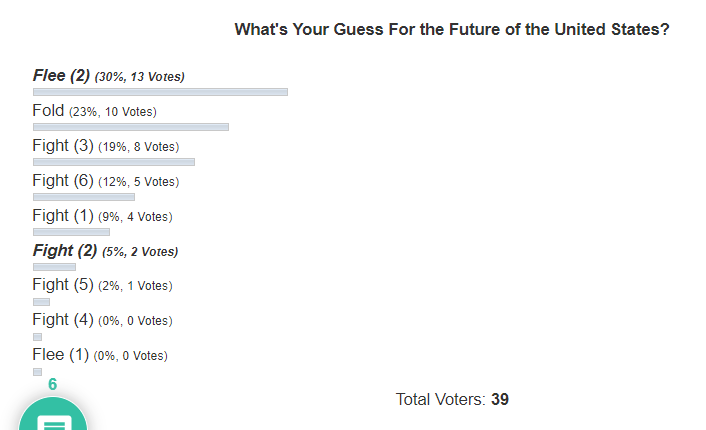 Thanks for posting both the #s and %–so many polls don’t do this minimizing believability.
I am glad to live in a red “flee to” state for whatever that may be worth.

Believe me Neil, I envy you a great deal.